What comes to your mind when you think of Croatia

Balmy crystal-clear sapphire waters of the Adriatic coast or the ancient walled city of Dubrovnik? Little unexplored hamlets and remote islands of Zadar and Split or the cascading waterfalls and lakes of Croatia National Park? Gastronomic delights and wines of Istria or the café culture and festivals of Zagreb?

Croatia has all this and a lot more. Living up to its slogan, “Croatia – Full of life”, this tiny young nation is filled with attractions of unimaginable beauty and diversity. No wonder, it draws visitors five times more than its own population(18.5 million vs 4 million).

Instagram updates, Facebook galleries, and glossy travel magazines had put Croatia on top of my wish list. Finally, in August 2017 I decided to find out what the fuss is all about.  I am happy to say I am bewitched by Croatia and it is now one of my favourite countries in Europe (will share that in another post).

While most people spend the majority of their time on its glorious 1778km-long coast and a staggering 1185 islands, I decided to go offbeat (like always). Instead of running from pillar to post in 10 days I chose to travel slow but deep in two places – Plitvice Lakes National Park region and Zagreb. The reason to do that was simple – I didn’t want to be apart of the problem (Over tourism in few places) but wanted to play a constructive role in finding a solution (under tourism in unexplored regions). You can soon read about that in my upcoming story on how Croatia is fighting Over tourism.

Today, I am here to share why this beautiful Croatia National Park should be on your travel map.

Plitvice Lakes is in the Lika county, which is bejewelled between Zagreb and Zadar and located at a stone throw-away distance from the Bosnia Herzegovina border. Whether you are a coming by road, train or air, getting here is a child play. It takes just two hours to reach the park from Zagreb or Split. More info here.

Plitvice is the oldest and the most well known Croatia National Park. As you walk through the maze of paths, woods, and meadows in Croatia’spostcard-image of Paradise on Earth, you why this park is country’s one and only natural UNESCO World Heritage site. 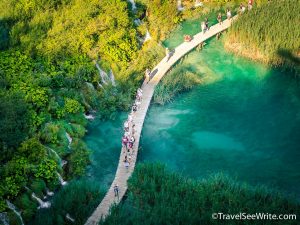 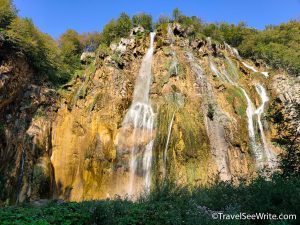 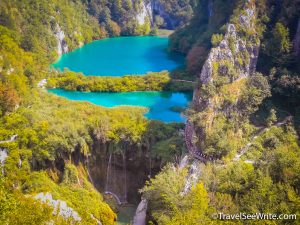 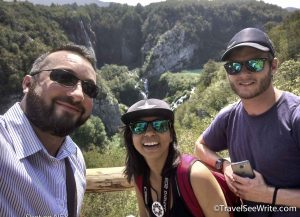 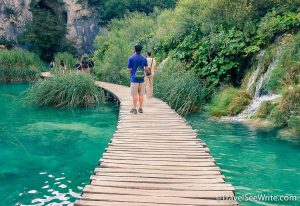 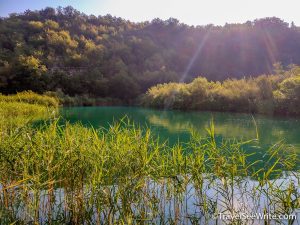 Spread over a green valley in the Croatian interior, a series of over 90 waterfalls tumbledown from one spectacular cascade to the next, pausing in the 16 sparkling turquoise lakes before disappearing into a sheer karst canyon. These lakes took shape only 12,000 years ago but even today, Plitvice’s landscape is one of Mother Nature’s ongoing work in progress. Not only it is loved by visitors but is also much loved by its resident bears and wolves and over 120 species of birds.

The Lika region is blessed with the modest Continental and mild Mediterranean climates, which makes it an ideal adventure playground for various activities that can be enjoyed throughout the year. You can bike the forest trails or hike the mountain peaks, ride a horse or swoosh through a zip line, buggy ride or ride the waves. The possibilities are endless. All you need, an adventurous spirit and let your curiosity be your guide. Wherever you go, the memories will follow. 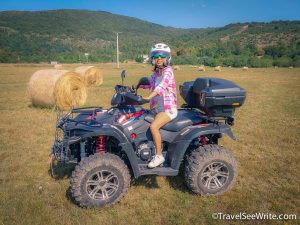 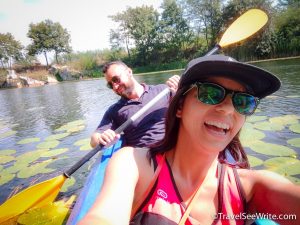 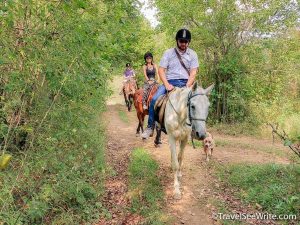 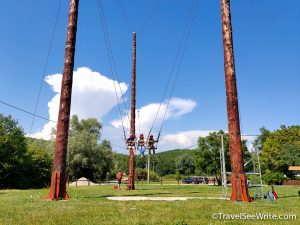 Free falling from the highest swing in Croatia 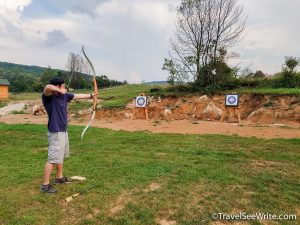 Locals are the unsung heroes of your travels. They can make or break your trip. Luckily, Croatians tend to be friendly, generous, well-read and bred, culturally conscious and English-speaking, not to mention how funny and hospitable they are. One of the reasons why I can’t stop raving about Croatia is because of the likes of Boris (the funny, caring, intelligent and well connected man), Maja (beautiful and elegant ladies from from Plitvice as well as Gospic), Ivica (the man behind the trails of PLitvice Lakes National Park) and many others who went out of their way to make me feel at home.

Wherever I went I was welcomed with open arms and heart filled with love. Whenever I dinned with Boris, he didn’t let me pay even once for my drinks or food. And, not just that. He even took me to his folk’s place to try home-made ‘Rakija’ (fruit-based alcoholic beverage). His sense of humour and caring personality was the reason my trip became so memorable. Never even once did I have a dull moment during the entire trip.

65km away from Plitvice Lakes in a tiny village of Smiljan, the greatest minds of the modern world, Nikola Tesla, was born. Thanks to him, we can enjoy electricity and wireless technology today. Therefore, it would be a crime to visit the Plitvice Lakes and not visit his birthplace.  His home is now converted into a museum displaying key moments of his life and working replicas of some of his most famous inventions.

While Istria is the undisputed leader when it comes to culinary delights of Croatia, Lika region is second to none with its traditional dishes and drinks. It is impossible to not lick your fingers when the ‘Peka’ dish arrives on your table along with the ‘Rakija’ (local homemade brandy). A Peka is a Dalmatia region signature dish made with blending of vegetables and meat, drizzled with olive oil, sprinkled with herbs, and then baked to perfection under a bell-like dome, or ispod čripnje in embers of fireplace. 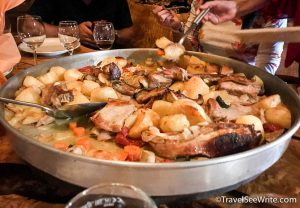 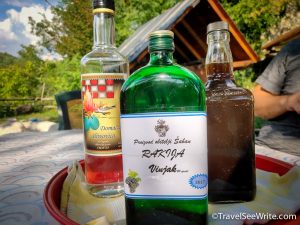 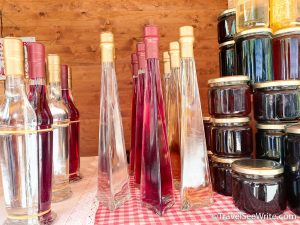 When offered a Rakija always remember to clink glasses, look into your fellow drinker’s eyes, and shoot it down. It is not meant to be sipped.

And, don’t forget to enjoy Medica(honey liqueur) or digestives after meals.

While the Plitvice Lakes are the biggest draw for the Lika region, there are other important historical war sites worthy of a visit. For example, the town of Udbina and Gospic in Lika county, which have been military frontiers in many important wars like the Hungarian war with the Turks in the 15th century, WWII between the Axis and Allied forces, and the latest Yugoslavian war fought between Serbs and Croats in the 90s. The wars were so brutal that much of the region and its records are destroyed. The tragic and the bloodiest battle on the Croatian soil was fought at Krbavsko polje valley with the Turks in 1493. Today there is a Church of Croatian Martyrs and a Croatian National Shrine in Udbina to honour and pay tribute to known and unknown victims of historical misfortunes.

On a brighter side, did you know that Udbina is also the sunniest part of Croatia? It could be raining in the neighbouring Plitvice Lakes but it will be sunny here.

Just next to the lakes lies Zelijava UndergroundAirbase, which was built by the Yugoslav government between 1958 and 1968 and was extensively used in the Yugoslav war in 1991. The bunker is one of Europe’s last remaining underground airbases which was built to even withstand a nuclear attack. It was like an underground city equipped with all facilities to last for months in case war erupts.

The underground base once housed dozens of MIG Fighter Jets but today it is left abandoned. 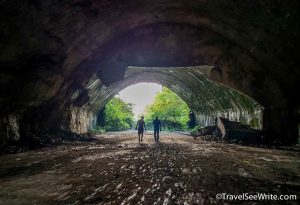 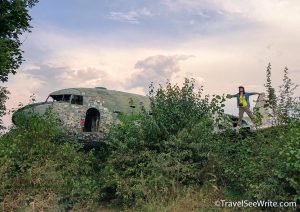 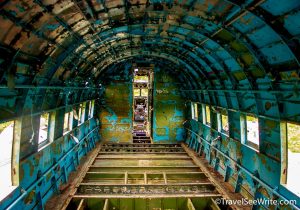 Just 20-minute drive from the lakes lies the underground world of stalactites, stalagmites, and stalagnates in the village ofNova Krslja. There is 45-minute long guided tour available to help you uncover the underground treasures of Barac Caves.

As per Amarildo Mulic, the Director of the National Park Una,

The main purpose of the park is to protect the extraordinary river scenery of waterfalls that lie on Una and Unac rivers running through the park.

The showstopper of the park is 24.5 meters high Štrbački Buk waterfall, the highest and most spectacular waterfall of National Park Una. The best thing is you can raft on the waterfall itself. A 9-km long 2-hour rafting tour starts below Strbacki Buk and continues downstream until Loskun. Here’s a video about my experience. PS: Getting to Una National Park is a little bit difficult if you don’t have a private car. However, you can always rent a car in Bosnia or Croatia.

So, as you might have gauged by now Plitvice National Park region is a perfect playground for nature lovers, landscape photographers, instagrammers, wildlife enthusiasts, history diggers and anyone who likes to connect to nature and people. Forests, caves, crevices, waterfalls, lakes, rivers, mountains and hidden treasures mean that at the extremely picturesque Plitvice National Park region, even the most ham-fisted amateur can leave feeling like Ansel Adams.

Here’s a video about 10 Offbeat things to do in the Plitvice Lakes National Park, Croatia

Hope these 10 reasons inspire you to visit Plitvice region beyond the lakes? Don’t forget to read the Complete Travel Guide: From Zagreb to Plitvice Lakes

Have you ever visited Croatia National Park or any other sight? If yes, I would love to hear from you. Also, don’t forget to check the rest of the stories from my 4 months solo budget travel in Europe.

I was invited by Plitvice Lakes Tourism Board. However, everything expressed above is based on my personal experiences and conversations I had in the country. Images used are shot by me. Please do not copy anything without written permission.

In my last article, I shared the complete Travel Guide on Finland answering why, when, where and what to explore in the land of…