Australia Travel Guide: Things to see and do in Melbourne

When the London journalist George Sala conferred the title ‘Marvellous Melbourne’ on a visit to the city in 1885, the down under city was the biggest and wealthiest city in the British Empire after London. Ever since the phrase struck a chord with everyone. And, it comes as no surprise why the ‘Queen of the South’ has been named the world’s most liveable city consecutively for the record 7th time by the Economist. The second largest city in Australia (after Sydney) is both dynamic and cosmopolitan. On one hand, it is Australia’s sporting and culture capital and on the other hand, it is recognised as a UNESCO City of Literature. Known as a leading financial city in the Asia-Pacific region, Melbourne is home to some of the Southern Hemisphere’s best art, food, and music. The city grows on you like a fine wine – from timeless trams to stroll-worthy laneways binding you in the social fabric and culture of the city. No one ever wants to leave the city and if reluctantly they do, they leave with a promise to return soon. So, let’s find out what’s so enchanting about ‘Marvellous Melbourne’ that tugs your heart.

THINGS TO SEE AND DO IN MELBOURNE

Melbourne has something for any culture hound, from the majestic National Gallery of Victoria to the colourful graffiti-filled laneways containing some of the best street art in the world. From weekly festivals to quirky fashion shows, there is always a show, exhibition or performance going on. One thing that shouldn’t be missed at any cost is its artistic graffiti laneways. Walk into any famous laneway and you’ll see droves of the camera-wielding crowds snapping graffiti, and art installations. And, why not? The hive of the bustling, creative laneways of Melbourne are iconic and form the throbbing heart of the city. Unused laneways have been given a new lease of life by transforming them into trendy hole-in-the-wall cafes, famed restaurants, astonishing bars, stunning art galleries, covert boutiques and a larger than life canvas for street artists. It’s a crime to leave Melbourne without paying homage to these modern temples of creativity – the ACDC lane, Hosier Lane, Centre Place, Flinders Court, Union Lane, Presgrave Place, Russell Place, Stevenson and Tattersalls Lane, Drewery and Sniders Lane and Blender Lane. Additionally, it’s not just the laneways that are given a facelift. The city is equally passionate about maintaining, restoring and sharing its heritage and culture. The beautiful old arcades sandstone heritage listed buildings, decadent theatres, and old government buildings are well taken care of and are open to the public. Near the historic Flinders Street Station in Melbourne’s Central Business District (CBD), the decade-old Federation Square has become a hotspot for performances and cultural events. The square is now considered one of the world’s best public spaces hosting more than 2,000 events a year. Things to See and do in Melbourne: Visit the Flinders Street Station

Cheer with the fans at Sporting Events

It’s not the high-rises that will catch your attention when you first land in Melbourne but the sporting culture that is the lifeblood of the city. Melbourne is officially recognised as the sporting capital of the world and that explains why ‘Sports Business’ named Melbourne as the Ultimate Sporting City in 2006, 2008, 2010 and 2016.  Here, the sport is not passively watched but passionately worshipped. Things to do and see in Melbourne: Watch Ashes

In fact, sporting events have nearly as many public holidays allotted to them as religion – everyone gets the day off for the Melbourne Cup horse race and the Friday before the AFL Grand Final! Attending the Boxing Day Match at Melbourne Cricket Ground (MCG) is as revered as a Christmas midnight mass. Melburnians are passionate about AFL football, cricket, and horse racing, while grand-slam tennis and Formula One car racing draw visitors in droves. Things to See and do in Melbourne: Watch a match at MCG

So, when you book your ticket to down under, do take a look at the annual sporting calendar of Melbourne. Some of the key events are the Australian Open, Australian Formula 1 Grand Prix, the Boxing Day Test, the Spring Racing Carnival and the AFL Grand Final. The city is also home to superb state-of-the-art facilities like the MCG, AAMI Park, Etihad Stadium and Melbourne Park. Things to See and do in Melbourne: Watch Australian Open Match at Melbourne Park

Melbourne is a serious culinary hotspot, with everything from burger joints to posh restaurants. The influence of multiple waves of immigration can be felt at every level, from the city’s longstanding obsession with coffee to a European drinking culture, to a lifelong affair with the flavours and spices of Asia. Basically, any kind of food you want, Melbourne has it. Whether you’re craving for modern, traditional, exotic or homespun flavours – Melbourne’s eclectic dining scene will satiate your hunger with a startling array of the world’s greatest cuisines. Ethnic communities have settled together in some areas, and as a result there’s a neighbourhood for each cuisine – head to Victoria St in Richmond for Vietnamese food, Lygon St in Carlton for old-school Italian, Balaclava for Jewish bakeries, Fitzroy for Spanish, Brunswick for Lebanese, Footscray for African and Chinatown for Asian cuisine. And, when it comes to dining, drinks can’t be left behind. Being close to the wine region, Melbourne serves up some of the best quality wines in the world. Try wine at St Jude’s Cellar where bare-bricked walls are stacked with myriad wine bottles.

Shop till you drop

There are certain cities that can turn even non-shoppers into shoppers. Melbourne is one such example. There are bargains galore at the inner-city outlets – DFO South Wharf, Harbour Town Docklands. If you are looking for designer bargains head outside of the city on Bridge Road, Richmond and Smith Street in Collingwood. Between the bargains, haggling and hidden treasures, markets in Melbourne are a must-visit for tourists. For the largest open-air market in the southern hemisphere visit the historic 140 years old Queen Victoria Market. For vintage trinkets, knickknacks, and hot jam donuts visit Camberwell Market and for one-of-a-kind, artistic creations take a stroll through Rose Street Artists’ Market. Shopping is therapeutic in Melbourne where the laneways and historic arcades are pieces of artwork themselves and exploring them is like going on a treasure hunt. You can either explore them on your own or join a shopping tour and shop till you drop at warehouses, outlets and little-known boutiques.

Enjoy fun moments at the river or the beach

The meandering Yarra River is the undisputed social heart of ‘Marvellous Melbourne’. Lined with restaurants, shops, and footpaths the banks are always bustling with action. The banks of the river have many barbecue and picnic facilities, fishing platforms, and jetties. You can either take a boat ride, go on a picnic stroll or enjoy a meal with a view at Southbank’s entertainment precinct. Things to See and do in Melbourne: Take a boat ride in Yarra River

In addition, there are trails and paths for the cyclists, walkers, and joggers. Also, Yarra River functions as the backdrop for numerous spectacular events like the famous Moomba festival, Rowing Regattas, the Melbourne Festival and Dragon Boat Festival. Melbourne is gifted to have so many beaches right on its doorstep. Drive six kilometers south-east of the city and you reach the St Kilda Beach. Travel further down the coast and you’ll reach Dendy Street Beach which offers panoramic views of the city and is home to Brighton’s historic bathing boxes.

Get a taste of the Great Aussie Outdoors

Few cities are as perfectly positioned for day trips as Melbourne. In an hour to a day’s drive out of town, you can find yourself watching wild penguins and koalas, admiring world-class wineries, rejuvenating at thermal hot springs, walking through ancient rainforests, or relishing the spectacular Grand Ocean Road views. Things to See and do in Melbourne: Go on Great Ocean Road Drive

The jewel attraction of Victoria, Great Ocean Road, is best explored over a couple of days; however, if you only have a day, you can still take in the highlights of the eastern end of the route.  Other must visit places are Mornington Peninsula for pretty seaside villages, superb wineries, fine hot springs, great restaurants and a whole lot of golf, Philip Island to join the penguin parade when hundreds of little penguins come ashore at Summerland Beach after a day swimming at sea and Yarra Valley to savour the world-class wine and wildlife.

Related: Wanna read more about the Philip Island? Don’t forget to check out the Penguin Parade on Philip Island. Things to see and do in Melbourne: watch Penguin Parade Things to do and see in Melbourne: Hit the beach

While Melbourne is an exciting destination to travel throughout the year, it is most fun during the summer months of December to March. The weather is pleasant and warm – perfect for sightseeing and other activities. However, be warned, it’s best to always take a pullover and an umbrella wherever you go. It won’t be wrong to say you can see four seasons in one day here. Interestingly, ‘Melbourne’s temperamental weather’ inspired the Crowded House to come out with a hit song Four Seasons in One Day. Things to See and do in Melbourne: explore the city with train


It’s very easy to see all of the city’s best attractions, sporting venues and shopping precincts by trains, trams or buses. All you need is a myki card and you’ll be ready to travel around the city. Downtown is pedestrian-friendly, with one of the world’s most extensive tram networks. The City Circle tram is a free tram that travels around the city in both directions taking you to the tourist hotspots. Melbourne’s tram system connects the CBD with the city’s suburbs and there are many dedicated bike paths and bike lanes on the roads. Have you been to Marvelous Melbourne? I would love to know your experience.

Malindo Mag:  Cover Story for the Month of May 2018 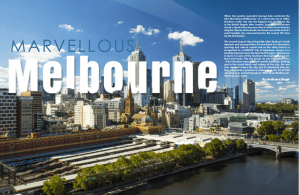 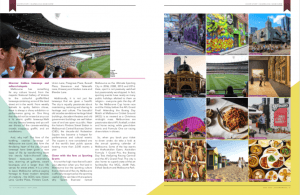 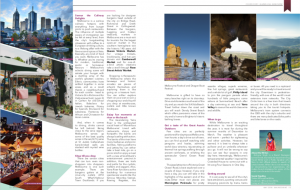 France is hailed as one of the guard posts of fine dining with its UNESCO-listed French cuisine, and no one takes this fact more…