Hanoi or Ho Chi Minh City: where should you visit first? Here’s your travel guide to choose between the two main cities of Vietnam. Vietnam is a treasure trove of nature, history and culture devotees. A snake-like narrow country will spoil you with choices – from booming modern cities, colonial towns, traditional villages, UNESCO World Heritage sites, archaeological marvels to otherworldly islands. You name it and Vietnam has it. Therefore, it’s a tough job deciding which place to visit first in Vietnam, especially if the decision is split between choosing Hanoi or Ho Chi Minh City née Saigon. Comparing the two metropolises of Vietnam is like comparing North and South Pole. Each city is as different as Delhi and Mumbai – both geographically and culturally. Ideally, you should visit both but if you can’t, here are some things to consider before you head to Hanoi or Ho Chi Minh City. I step into Ho Chi Minh City carrying the Vietnam War relics on my mind but what I see is a 180-degree transformation. The largest city in the country with a population of 9 million has moved on from a dreadful past and transformed into a modern global city. The influence of foreign cultures – particularly American and French is evident everywhere. As I walk through the thoroughfares of Saigon, I can feel the spontaneous and open vibe of the city. A city, where innovation is king and young trendsetters lead the way, alongside thriving gadget-totting entrepreneurs and booming businesses. The financial capital of the country has more investment, better infrastructure, swanky hotels, upmarket restaurants and throbbing nightlife. Unfortunately, traffic and pollution have come as an add-on to the spectacular growth of the city over the last several years. Ho Chi Minh City juxtaposes the past and the present like no other. While I enjoy the modern flair of the city, its past is difficult to ignore. Especially, the War Remnants Museum, which has graphic details of the Vietnam War and the Reunification Palace, which looks exactly as it was when the North Vietnamese forces took over in April 1975. The street food and coffee culture is ubiquitous in HCMC but tends to be slightly sweeter than what you find in Hanoi. For shopaholics, there are a plethora of options such as Ben Thanh market for cheap souvenir options, or Dong Khoi for upmarket boutiques. Also, the southern city is the king of the malls. Shop till you drop is a mantra here. With so much to see and do in HCMC, it’s impossible to not get infected by its high energy. People work hard and play harder in this dynamic city. It’s definitely worth a visit. Motorcycle is the ubiquitous mode of transport in Vietnam

After exploring the southern city of the country, it was time to move North. The capital city is famous for its thousands of colonial-era buildings and over two dozen exotic lakes. Known as the “Paris of Asia”, Hanoi exudes grace and grandeur through its appearance and architecture amidst the chaos of modern day living. Hanoi is a melting pot of the historic charm and the expansion of modern realms. A place still preserving grand old boulevards and ancient pagodas where locals practice their tai chi moves beside tree-fringed lakes. I couldn’t find a single dull moment walking the narrow-congested streets of the Old Quarter. During the day, it is a thriving hub for commerce selling everything under the sun at throwaway prices. In the evening, it transforms into one giant street food market. The transformation is so quick that I almost got lost. Hanoi is the home of pho (noodle soup), Vietnam’s national dish, which you can get on just about any street corner for as little as a dollar. The best thing I liked about Hanoi was it being the Mecca for the laid back, on-a-shoestring traveler like me. If you arrived with an empty bag, Hanoi is where you want to be. There is so much to shop – superior choice of crafts, silk accessories, handmade goods, wood-and stone-carvings, embroideries, lacquerware, and export surplus items. Hanoi is peppered with attractions like Hoan Kiem Lake, the Ngoc Son Temple, the French Quarter and the Hanoi Hilton, Temple of Literature, the Vietnam Army Museum, and the Ho Chi Minh Mausoleum and Nha Tho Cathedral among many others. For a day trip from Hanoi, you can always escape to Ha Long Bay, a dreamy seascape of jagged limestone rocks jutting out over calm waters is Vietnam’s number one tourist attraction. So, in a nutshell, this is a tale of two great cities of Vietnam. You should choose a city (Hanoi or Ho Chi Minh) that best fits your tastes and interests. If you prefer high-energy bustle, head to Ho Chi Minh City; if you are looking for a more relaxed atmosphere, visit Hanoi. But whichever you choose, your visit will be a rewarding one. 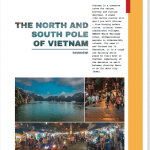 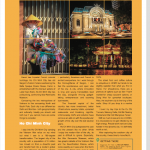 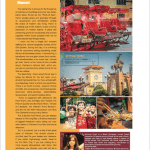 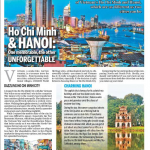 All the experiences shared above, like always, are based on my (Archana Singh’s) personal experiences. Pictures posted above were either clicked by me or provided by my friend Oliver.

Looking to work from home in Goa? Here are the pros and cons of doing a long-term workation in Goa from the people who have moved to Goa.