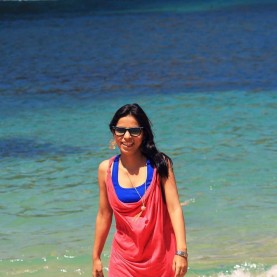 A Brand Management Expert by profession and a Travel Journalist by passion, who loves to explore offbeat places in search of untold human stories. With over 15-years of Marketing experience under her belt in India and abroad, she works as a Brand Consultant, Influencer, Photographer and a Public Speaker. She is a multiple award-winning writer, who is committed to working on issues like women empowerment, responsible tourism and social inclusion of the underprivileged. She is considered as one of the top Travel Influencers of India and regularly speaks at prestigious global conferences like WTM ATM, HTM, PATA, TBC-ASIA, ATWS, TBEX, Photo tourism Conference & Awards, and IAMAI among others. Besides documenting her experiences on www.travelseewrite.com, she regularly writes for global publications in India, US, UK, South East Asia, and the Middle East. Currently, her focus is on working with emerging Markets of Asia, Eastern Europe, and the Middle East to help them grow their tourism market. Having worked on both sides of the table, she provides useful information to the armchair and aisle-seat travellers alike; and help brands plan and execute strong insight led campaigns.

Planning to visit Hong Kong but not sure about how many days are enough and what’s the best Hong Kong itinerary, read this post.

Are you traveling to Hong Kong for the first time? Read these 12 Hong Kong Travel Tips before visiting Hong Kong.

Despite Belgrade being named as one of the best places to visit in Europe by Lonely Planet, the Serbian capital is still not seen in the league of the poster boys of Europe – London, Paris, Berlin, Amsterdam, Vienna or even Prague. However, when it comes to taking a city break steeped in culture, history, scenery and gastronomy still untouched by the claws of over tourism; popular European cities don’t stand a chance in front of Belgrade. And, if you are wondering what to see in Belgrade, don’t worry there’s an abundance of attractions in Europe’s most magical yet most underrated city.

The best Jungle safari In India is not just about tiger sightseeing. It is also about enjoying the rest of the flora and fauna of the jungle. Here’s how to enjoy best Tiger Trail in Madhya Pradesh

In 2012, when I visited Tuscany for the first time, I did things that most first-timers do – tick marking all the attractions, travelling…

The Czech Republic and Slovakia peacefully uncoupled in 1993 after Czechoslovakia’s Velvet Revolution in 1989. 26-years after their velvet divorce, Slovakia is slowly and…

The down under city on a rise Ten years back when I was planning my first trip to Australia and asked for recommendations, hardly…

There’s no dearth of Buddhist shrines in Asia. But none of the places hold the symbolic and historical value of Lumbini, the birth place of Buddha.

While there’s no place like home to celebrate Christmas, these 15 places are the best European Christmas Destinations to spend the holidays.

France is hailed as one of the guard posts of fine dining with its UNESCO-listed French cuisine, and no one takes this fact more…

Prague or Praha, the capital city of the Czech Republic, is rightly nicknamed as the ‘Mother of Cities’. A city that has two faces….

In my previous post on Plitvice Lakes, I shared 10 compelling reasons to go from Zagreb to Plitvice Lakes and explore the offbeat gems of…

Kolkata, the 350 years old second largest metropolis of India, manifests itself differently from other metros. Being the former capital of British India, Kolkata…